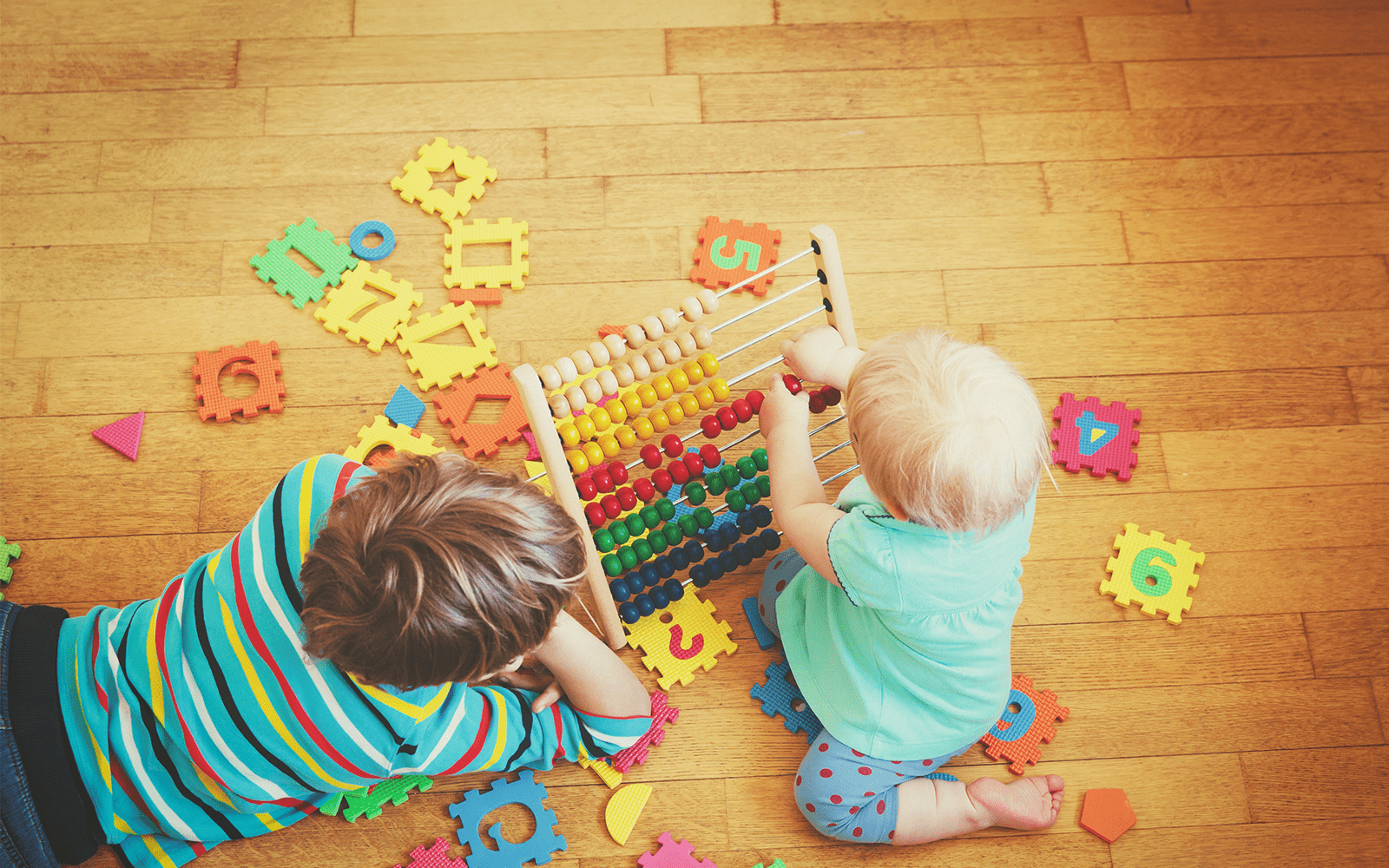 In this week’s Notes from Olympia: Proposal introduced to dedicate new revenue to early learning, updates on early learning bills, highlights of the week and a twist on trivia.

(I’m taking some liberty with the term “trivia” this week)
Anyone who has had any connection to our state Capitol can tell you the value of legislative assistants. We know they keep that place humming!

Progressive Revenue Proposals Receive Attention. A perennial legislative issue centers on our state’s regressive tax system and the question is always asked – is this the year where more progressive revenue options will be passed?

This question received attention this week with a public hearing on Representative Noelle Frame’s proposed “Wealth Tax,” HB 1406.  This bill (also dubbed the “Billionaire’s tax”) would impose a 1% tax on financial tangible assets, with the first $1 billion exempt.  If enacted, it is expected to generate $2.25 billion in 2023 and $2.5 billion in 2024.  The Washington State Wire’s interview with Representative Frame provides background on the proposal and Representative Frame’s response to thoughts on a potential legal challenge.

These discussions about potential new revenue will go down to the very end of the legislative session. And Legislators will debate whether any new funding should be dedicated to specific purposes and negotiate appropriate levels.

At the same time new revenue is under discussion, there is bipartisan support to fund the Working Families Tax Credit that was first put into statute in 2008 but has never been funded.  Our state’s version of the Earned Income Tax Credit, the Working Families Tax Credit serves as a rebate, providing a cash payment to households. This Seattle Times article provides a great background on the concept and the current path.

HB 1297, prime sponsored by Representative Thai (and co-sponsored by a long list of bipartisan House members) updates the 2008 framework to provide certain families up to $950 annually and seeks to simplify the program’s administration.  That bill was approved by the House Finance Committee on February 7th.  The Senate version, SB 5387, was heard in the Senate Human Services, Reentry and Rehabilitation Committee on February 4th.

Early Action Bill Continues to Move. After lengthy floor debate on Monday night, the House approved its Early Action Bill, ESHB 1368.  This measure invests $2.2 billion in federal dollars to provide relief and support to sectors such as small business, child care, public health and K-12 education.  A total of $50 million is included for child care and will go toward: grants for licensed providers, payments to Family Friend and Neighbor providers, increased reimbursement for school-age children through April, and provide funding for the Department of Children, Youth and Families to incentivize providers to serve children participating in the subsidy program.

As noted in last week’s newsletter, this bill is on the fast track as there is desire to get money into the hands of people most feeling the effects of the pandemic.  The Senate Ways and Means Committee held a public hearing on Tuesday evening and voted the bill at its Thursday meeting.  The full Senate is expected to take up the bill within the next week.  If the bill is amended in the Senate, it will need to return to the House for concurrence in Senate amendments.  If it passes the Senate without amendments, it will go straight to the Governor.  Governor Inslee is expected to sign the bill swiftly and state agencies are primed to start deploying investments.

During the debate, legislators acknowledged this bill is just one step and further relief is expected.  With President Biden and Congress negotiating another relief package, we could see a second legislative relief package and certainly additional COVID-related response proposals will be included in the 2021-23 operating budget.

New Legislators Start to Pass First Bills. A number of traditions have been put on hold during the pandemic.  In the State Senate, there is a fun tradition wherein a new Senator presents the body with gifts to celebrate passage of their first bill.  The gifts can be something personal to the Senator or reflective of their district.  When my daughter paged in the Senate a number of years back, she recalled passing out sunglasses which was the gift of then Senator Cyrus Habib. (Senator Habib is blind, and sunglasses are his signature look.)  A former Senator I know gifted cheese from a local farm in his district when he passed his first bill.  With a largely virtual session, this tradition has been put on hold.

In its place, the Senate has started sharing positive comments about freshman Senators when their first bill is up for consideration on the floor.  There can be some friendly ribbing, but it is also a reminder that despite the perception of deep partisan rancor, the members of the Washington State Legislature generally have respect toward each other.

On Wednesday evening, freshman Senator T’wina Nobles of Pierce County passed her first bill, SB 5184, which would establish a point of contact in all K-12 schools for students in foster care.  Senator Nobles lived in foster care as a youth and spoke to her personal experience in her remarks.  After unanimous passage of her bill, Senator Nobles gave a very personal and moving speech (TVW clip 2:25).  I happened to be on a zoom right afterwards and everyone was wiping tears. Representation and lived experience matter. 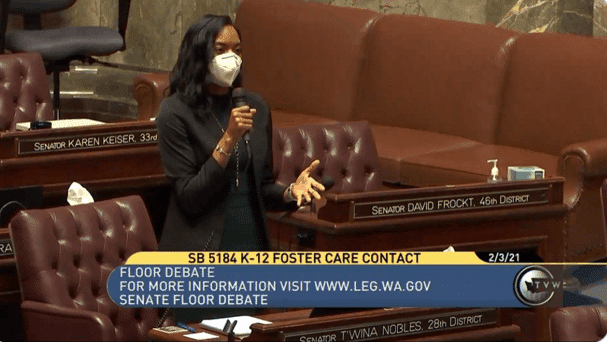 Fair Start bills advance. On Wednesday, the House Children, Youth and Families approved a substitute to House Bill 1213 by Representative Senn and the Senate Early Learning and K-12 Committee approved a substitute to Senate Bill 5237 by Senator Wilson.  Both Fair Start Act bills now advance to the House Appropriations Committee and the Senate Ways and Means Committee, respectively.  Note that Representative Senn’s capital gains bill HB 1496 would direct a portion of revenue generated toward the Fair Start for Kids Account (description is above under revenue section).

While identical when introduced, after the amendments adopted in the respective committees, the bills now differ.  Start Early WA has developed two documents that can be found on our website that include a side-by-side comparisons of both bills’ approaches, and a summary of amendments to both bills including highlights of the current differences in the Senate and House versions.

Below is a summary of the major differences between the bills as currently written:

ECEAP Entitlement. This week, House Majority Leader Pat Sullivan introduced HB 1451 which relates to ECEAP entitlement. The bill will receive a Public Hearing in the House Children, Youth and Families Committee on Tuesday, February 8th and is expected to have a vote on either February 10th or 11th.

The major proposed policy in HB 1451 is to push-out the ECEAP entitlement date from the 2022-23 school year to the 2026-27 school year. This is consistent with the language in the current versions of the Fair Start Act. The bill also defines entitlement as voluntary enrollment in a full-day program and directs DCYF to develop an implementation plan for meeting entitlement by September 30, 2022.

Following the work session, the Committee held a public hearing on HB 1370 by Representatives Callan and Shewmake which would make improvements to the current Early Learning Facilities Program.  That bill is scheduled to be voted on in House Capital on Tuesday, February 9th.

What’s on Deck for Next Week?

On Tuesday, the Senate Ways and Means Committee will hold public hearings on SB 5136 which would waive licensing child care licensing fees through June 30, 2023 and SB 5151, the Department of Children, Youth and Families licensing bill, which would allow for licensure of outdoor nature-based preschool programs.

Regardless of their current location or their boss’ party affiliation, the legislative assistant’s answers had a similar theme.

What do they miss about in-person session?

(Writer’s note – I was surprised none of them mentioned missing potato, beef or dairy day. That would be at the top of my list).

Thanks to all of the wonderful legislative assistants.  They are key to the success of the Capitol community!  I know I miss streaming by their desks and interrupting their work.