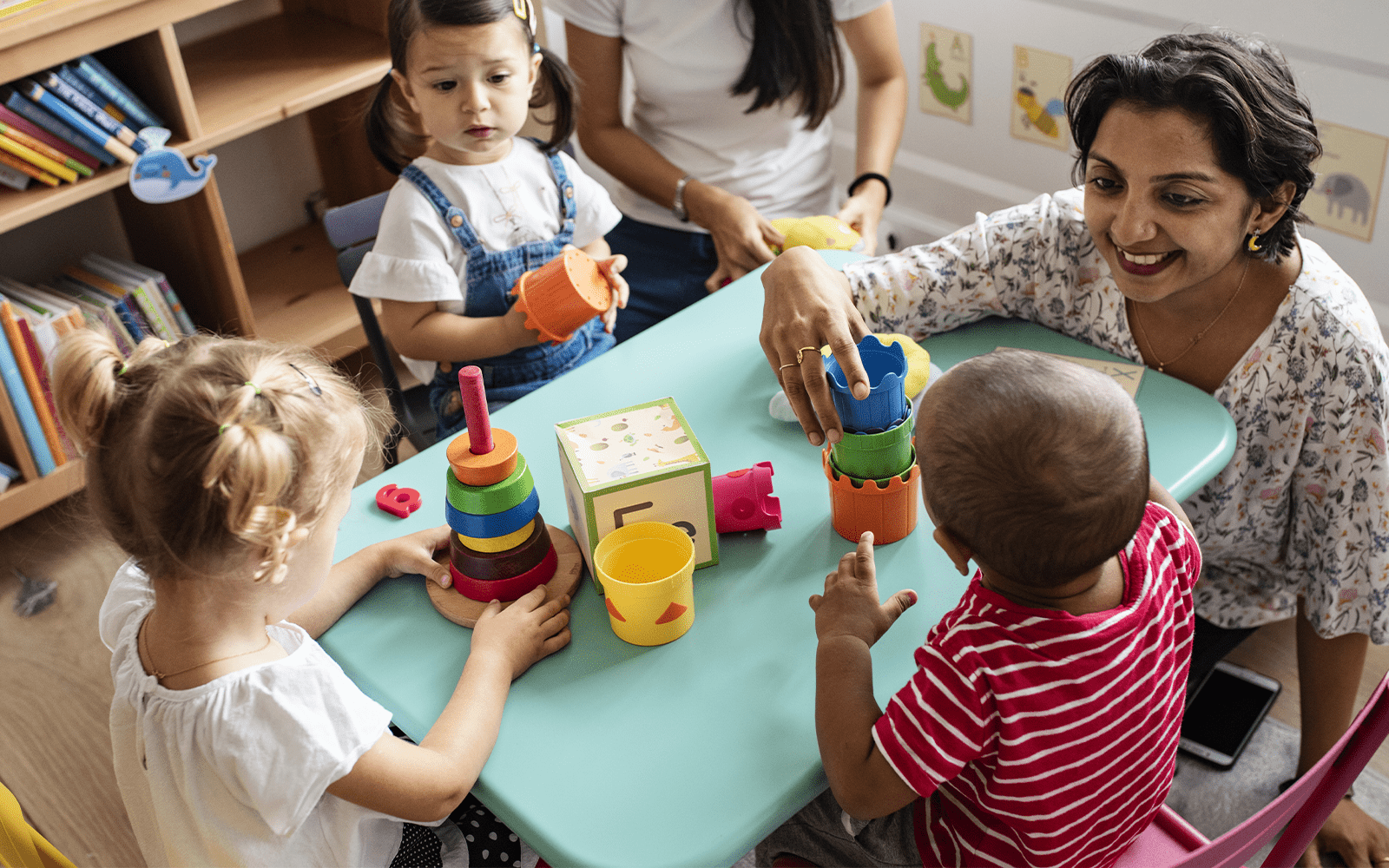 In this week’s Notes from Olympia: Highlights of the Week, Bill Round Ups and President’s Day Trivia.

Early Action Bill Scheduled for Signature Friday. Governor Inslee is scheduled to sign the Early Action bill, ESHB 1368, on Friday, February 19th at 1:00 p.m.  See Start Early WA’s January 29th newsletter for a summary of how the $50 million for child care will be distributed.

State Revenue Projections Continue to Exceed Projections. This week, the state’s February Economic and Revenue Forecast was released.  The good news is that state General Fund collections from January 11 – February 10, 2021 came in $269.5 million more than forecasted in November (a 15.3% increase).  The next revenue report will come out on March 17th and will inform the Senate and House budgets that will be released shortly thereafter.

Fair Start Act Bills Heard in Fiscal Committees. Both the House and Senate versions of the Fair Start for Kids Act are moving as the measures received approval from their respective fiscal committees.  Start Early WA continues to update summary documents on our website to reflect a summary of the latest amendments and a side-by-side comparison of the latest versions.

SHB 1213 received bipartisan support in the House Appropriations Committee on Wednesday with five Republicans joining their Democratic colleagues in voting yes on the bill.  Prior the vote, a few technical amendments were adopted, the most significant of which was inclusion of a “null and void” clause which means the provisions of the bill need to be funded in the final adopted budget to be implemented.

On Thursday, the Senate Ways and Means Committee approved SSB 5237.  Prior to the vote, amendments were taken to change the reduce the income eligibility thresholds for Working Connections Child Care and to change the appointing authority for most members of the Early Learning Advisory Council.

Senate Capital Gains Bill Advances. On Tuesday, the Senate Ways and Means Committee approved SSB 5096 which would create a capital gains tax in Washington state.  The tax rate included in the bill is 7 percent and the first $250,000 of capital gains are excluded from the tax as are certain sales or exchanges.

Current statute provides that the Education Legacy Trust Account can be used to support schools, expanding access to higher education by funding new enrollments and financial aid, early learning through the 2019-21 biennia (although there is legislative intent to extend this to future biennia) and other educational improvement efforts.

Capital gains is just one of the active revenue options under review.    This Crosscut article has a great summary of what is in play and describes the differing approaches. This Spokesman Review article highlights the Senate hearing and plans for the revenue.

Work of Fiscal Committees Wrapping Up; Next up – Floor Action. Monday, Feb. 22nd is the deadline for bills to pass out of fiscal committees. This week we have seen marathon fiscal committee hearings until well into the evening. The law of averages – it always seems that bills you are following are up at the SAME time in different committees. One upside of virtual session is you do not have to dash between legislative buildings and you can watch the debate on multiple monitors. People who signed up to testify this week are real troopers – some waited six or seven hours to testify.

Bills continue to move through the process and nearly every bill passed in Appropriations was amended to include a “null and void clause.” This means that if funding is not ultimately provided in the adopted budget, the provisions in the bill will not go into effect. This clause allows the bills to advance through the process and meet the deadlines while the budget details are being worked out.

The next big deadline is March 9th when bills must be passed out of their house of origin. This means both the Senate and the House will spend most of the next two weeks in hybrid Floor sessions, with a few members and key staff physically present at the Capitol, but the bulk of legislators will be on Zoom. They fully anticipate this process will be slow going and we should anticipate communication and logistical breakdowns.

ECEAP Entitlement Bill Passes Policy Committee. On Monday, the House Children, Youth and Families Committee approved SHB 1451 which would move the entitlement for ECEAP to the 2026-27 school year and redefines entitlement as a full-day program.  The bill is now in House Appropriations and as of this writing, has not been scheduled for a hearing.  The February 22nd fiscal committee deadline would not apply to this bill because it is “Necessary to Implement the Budget,” as moving the ECEAP deadline will result in budget savings.  Additionally, this concept is also part of the Fair Start for Kids Act bills, which are moving in both chambers.

Waiving of Licensing Fees Folded into DCYF’s Licensing Bill. In an effort to reduce the number of bills moving through the process, the content of some bills is being amended into similar bills.  One example is this is SSB 5151 which was amended and approved by the Senate Ways and Means Committee this week.  Originally introduced as the Department of Children, Youth and Families bill around licensing, the bill was amended in Senate Ways and Means to include the components of SB 5136 which would suspend child care licensing fees through June 30, 2023.  This action means that SSB 5151 now includes both the agency’s licensing issues as well as the temporary waiving of child care licensing fees.  This bill now moves to Senate Rules.

Early Learning Facility Bill Advances. On Wednesday, the House Capital Committee approved HB 1370 which makes changes to the Early Learning Facilities Fund.  At the hearing, amendments were adopted to reduce the commitment period for grantees receiving more than $200,000 from the Fund from 20 to 10 years, and delete a section related to start-up grants connected to the Fair Start for Kids Account.  With these amendments, the bill next moves to House Rules and potentially the Floor for consideration by the full House.

Answer 1: According to a 2016 edition of “Thurston Talk,” a total of four sitting United States Presidents have visited the Washington State Capitol.

This is a bit of a trick question, because FIVE Presidents have actually visited Olympia, but President Rutherford Hayes’ October 1880 visit was before Washington became a state. See below for a summary of the Presidential visits (and some historic pictures).

Answer 2: Thurston Talk opines that the transition to airplanes from trains as the preferred mode of transportation meant that Presidents visiting Washington State have been more likely to land in Seattle (or even Spokane) for a visit. It was much easier to stop in Olympia when a President was traveling through by train. As those of us who commute to Olympia via SeaTac can attest, that drive can be traffic filled. It does make sense that any Presidential visits to our state would be centered near major airports.

A quick summary of Presidential visits, courtesy of Thurston Talk and HistoryLink.org Essay 5466:

President Teddy Roosevelt visited the Capitol in 1903 during a tour of Western states. President Roosevelt spoke to thousands gathered on the Capitol campus and took in a special game from Olympia’s minor league baseball team. He said of Olympia, “You have one of the prettiest little cities I have ever visited. It is a delightful place for a home. I have been greatly surprised and gratified. I shall never forget Olympia and her generous people.”

President William Taft’s 1911 visit lasted just one hour. He lunched at the Governor’s Mansion (picture below) where a memorable exchange occurred after another guest hit the President’s hand with a hot coffee pot. “O, I beg your pardon. I didn’t mean to burn you.” To which President Taft replied, “I’ll remember you warmly.” 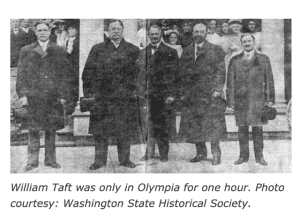 President Franklin Delano Roosevelt’s 1937 visits to the Capitol was extremely brief, lasting only a few minutes. He was in the region touring what was to become Olympic National Park. After a quick stop-by to the Governor’s mansion, FDR was back at the road, reaching Fort Lewis by car within the hour.

HistoryLink.org devoted an entire piece to President Harry Truman’s 1948 visit where he stayed overnight at the Governor’s Mansion which was inhabited by the President’s friend and former U.S. Senate colleague, then Governor Mon Wallgren.

President Truman flew directly to the Olympia airport from Washington D.C. (the first and last U.S. President to do so). The trip was billed as a “vacation” and President Truman used the Governor’s mansion as home base while he toured the sites in Washington state (think mountains and fishing). Politics never takes a vacation and the real reason for President’s Truman landing pad was its proximity to San Francisco where the United Nations was meeting and he wanted to be close in case he needed to intervene. 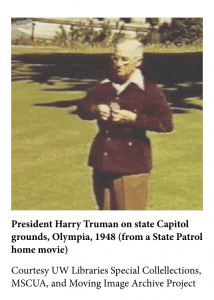 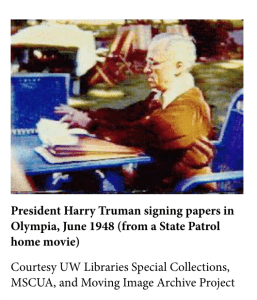 Two final additions to President Truman’s visit to Washington state.  He began his trip with a speech at the Spokane Club (I wondered if he enjoyed some of their famous orange rolls?).  It was after this speech that the President had the infamous exchange with a Spokesman Review reporter, telling the reporter, “The Chicago Tribune and this paper are the worst in the United States.”