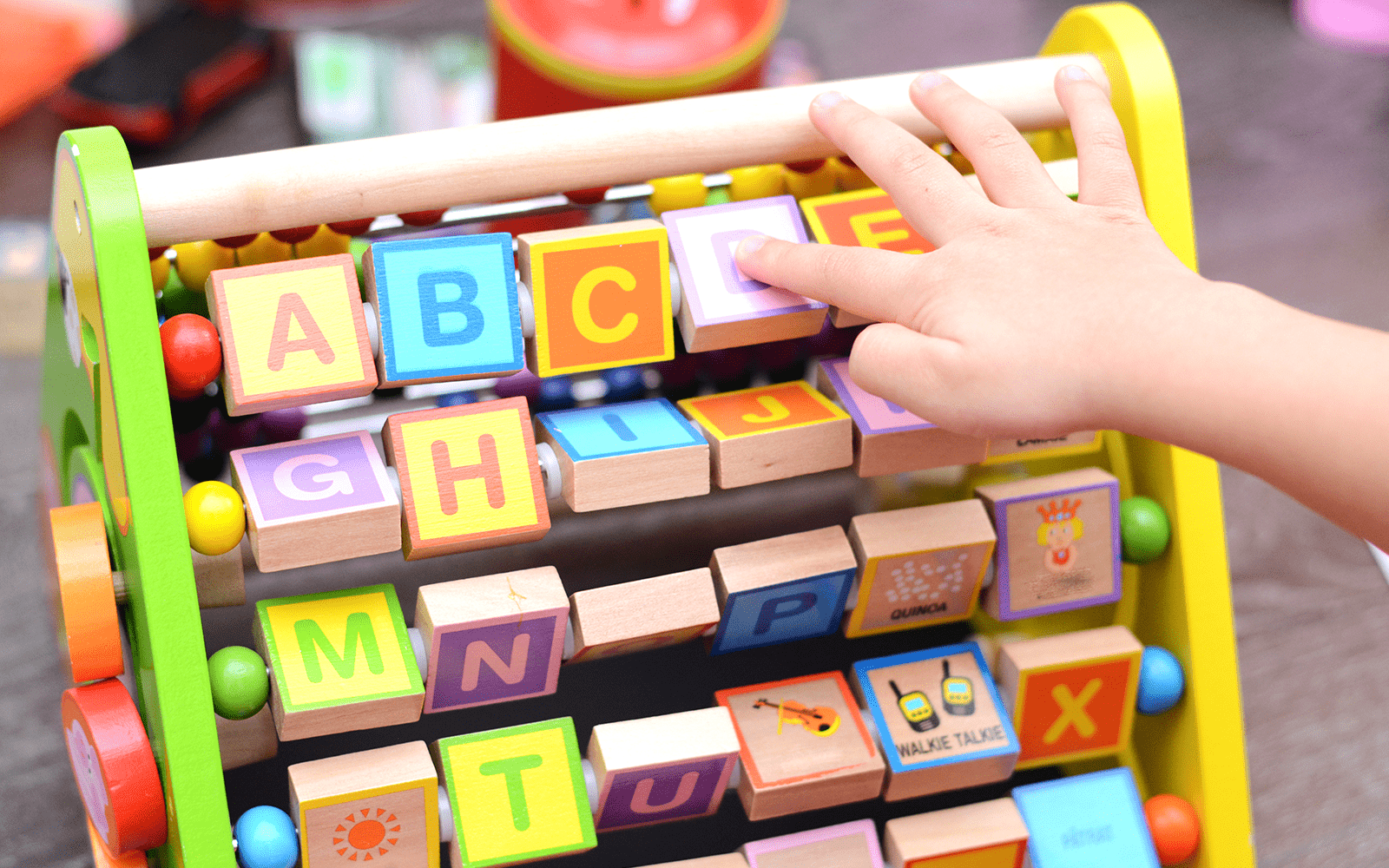 Notes From Olympia: April 9, Week 13 of the 2021 Legislative Session

In this Week’s Notes from Olympia: Status of Early Learning Bills and Trivia 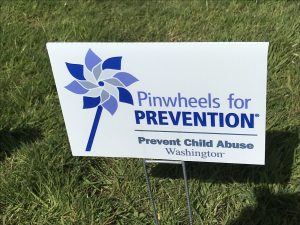 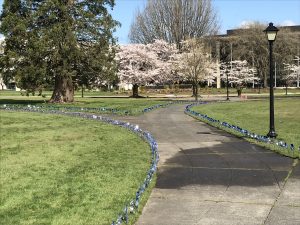 April is Child Abuse Prevention month and there is a long-standing tradition to set pinwheels around the Capitol grounds. Pinwheels are the symbol for child abuse prevention because they symbolize playfulness and joy and are a physical reminder of the great childhoods we want for all children.  It is great to see the pinwheels return this year (and great to see the blooming trees!).

Breaking News (and the Trivia Question!)

While we did not intentionally omit today’s Trivia Question to stump you, doing so provides an opportunity to share the breaking news that late last night, the House passed the Fair Start for Kids Act on a bipartisan 62-36 vote. The bill is so close to the Governor’s desk, but first needs to return to the Senate so they can concur in the amendments made in the House. One step closer!

A total of three amendments were adopted prior to the vote. We have updated our summary to include the details of the latest version as adopted in the House last night.
And, here is the Trivia Question:

How many Olympic-sized swimming pools would it take to fill the Legislative Building with water?

Floor Activity Dominates Week. This is a shorter update because there is not a lot to report. The public focus of the legislative work this week has been on the Senate and House floors as both chambers review bills from the opposite chamber prior to the Sunday, April 11th deadline. The days have blended into each other as legislators spend hours in their respective party caucuses reviewing bills and then “on the floor” in debate and voting.

Status of Early Learning Bills. As reported in last week’s update, E2SSB 5237 will be the vehicle for the Fair Start for Kids Act.  As a reminder, the Start Early Washington website has a summary of the version of E2SSB 5237 as passed out of the Senate Ways and Means Committee.

E2SSB 5237 is currently awaiting action on the House Floor. As of this writing, there are seven proposed amendments to E2SSB that will be considered prior to a House vote, action that could come after our publishing deadline. The proposed amendments range from adjusting some of the implementation deadlines to shifting representation on the Early Learning Advisory Committee and its subcommittee(s) to other clarifying changes.  We will report out on the adopted amendments in next week’s newsletter and will also update the summary document on our website shortly after the House floor vote.

On April 6, the House approved SSB 5151 by a vote of 88-10, with one member absent. This is DCYF-request legislation sponsored by Senator Claire Wilson.  It has a component related to creating child-specific child welfare licenses, waives child care licensing fees through June 30, 2023 and makes the outdoor preschool pilot permanent. Because the bill was amended in the House, it needs to return to the Senate for concurrence (approval of) House amendments before it moves to the Governor for hopeful signature.

With the Fair Start for Kids Act taking a comprehensive look at early learning policy and budget issues, there are fewer early learning bills in play this year. A final key bill is ESHB 1370 which makes improvements to the Early Learning Facility Funds and names the funds in honor of former Representative Ruth Kagi. The bill is currently awaiting action in the Senate.

Budget Negotiations Underway.  In addition to the public facing floor activity, lead legislative budget writers are meeting with staff reviewing and negotiating on differences between the Senate and House budgets. We expect a final negotiated budget for Senate and House approval toward the end of the scheduled legislative session.

The Senate budget bill, ESSB 5092, will be the vehicle this year.  (Start Early Washington also has a summary of key provisions of the Senate and House budget proposals on its website). 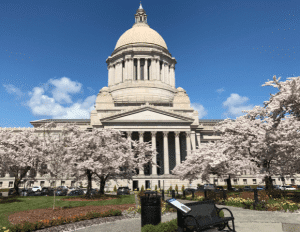 What a silly trivia question, because, if the Legislative Building filled up with 136 Olympic-sized swimming pools, there would be more than a few problems!

I found this factoid on the Department of Enterprise Services website and it caused me to wonder – what is the impetus to measure these types of things?  If you are curious about other comparisons – the Eiffel Tower is 3.5 times the height of the Legislative Building and the approximate tons of bricks used to build the Legislative Building equals the weight of 5538 Orca whales. Tuck those away for a future trivia game and wow your family and friends with your wide array of knowledge.

My mind was on the Legislative Building because, if we were able to safely be on the Capitol Campus, lobbyists would be spending this whole week on the “3rd Floor.”  The 3rd Floor is the non-creative name for the literal 3rd Floor of the Legislative Building and is the location to the main entrances to the Senate and House chambers, which are on opposite sides of each other.

During the periods of floor cutoff, the 3rd Floor is abuzz as lobbyist aim to catch lawmakers and staff to make final pitches on bills, amendments and budget discussions (and to share gossip). In a nod to tradition, lobbyists can “send in notes” to legislators via the Sergeants to request that a legislator come out to discuss an issue. This requires a lot of patience because when you send in notes, you can wait (and wait and wait!). There is little seating provided, so it’s wise to wear comfortable shoes as the days (and nights!) are long and the marble floors are not forgiving.

With a largely virtual session, there is no 3rd Floor activity this year.  Personally, I miss it because, while it is exhausting (and frustrating), it is also adrenaline fueling and the down time allowed me to build relationships with wonderful people working hard to advance policies for Washingtonians. Yes, I am still idealistic about this process. 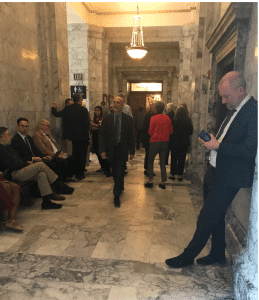 A simpler time. The 3rd Floor pre-Covid. Lots of waiting, pacing and being “on the lookout.”