Included in this edition: Interesting aspects and agenda items of legislative work sessions and collective bargaining agreements, and updates on the state agency decision packages. 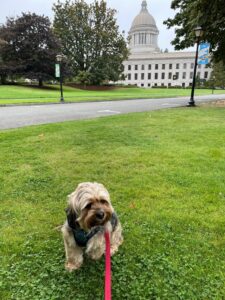 As we get further into fall, we see an uptick in activity that will influence the 2023 legislative session. Of course, one of the biggest influencers will be the Nov. 8 General Election and the subsequent leadership and legislative committee assignment decisions. Be on the lookout for a detailed analysis of upcoming changes following the election. In the meantime, this edition features timely updates.

As part of the gear-up for the 2023 legislative session, legislative committees held a number of work sessions in the last few weeks. An interesting aspect of the preelection meetings is they include the sitting lawmakers, some of whom may not be returning in 2023.

On Sept. 27, the Senate Ways and Means held the first in-person committee meeting since March 2020. I think it would be fair to say both lawmakers and audience members were excited to be back together.

Among the agenda items was a presentation by State Auditor staff regarding the audit of the state’s receipt and usage of federal dollars. It is not a surprise to see this review given that the state received billions of federal dollars to address pandemic-related items.

Of note for early learning, the State Auditor representatives discussed their finding that $293.2 million of the federal Child Care and Development Block Grant funds were “unauditable” due to the Department of Children, Youth and Families’ accounting practices which limited the State Auditor’s ability to access the level of detail needed to determine if funds were spent appropriately.

Secretary Hunter committed to working with the State Auditor; his agency submitted a decision package to provide the Information Technology investment needed to support the requested level of accounting detail.

On Oct. 11, the House Children, Youth and Families Committee held a work session focused on:

Each of the presentations linked above contain excellent background and data on the various programs, and the meeting video is worth a watch. The work session highlighted not only general confusion over the varying goals and target populations for the programs, but also the challenge for families in securing needed supports and care. We can expect these conversations to continue into the legislative session.

You are probably wondering why an early learning related newsletter includes an update about a rather obscure legislative committee related to state employment. I actually have a good answer for that!

The Oct. 13 meeting of this Joint Committee received an update detailing the estimated costs and themes of the various collective bargaining agreements (CBAs). This bargaining not only involves state employees but also includes higher education employees, state and K-12 education health care expenses and non-state employee groups of family child care, adult family home and language access providers. These collective bargaining agreements will be included in the 2023-25 biennial budget and with the state’s revenue picture tightening (See Sept. 29 Notes From Olympia), the price tag of these agreements will impact the availability of funding for other investments.

In short, the estimated costs of all the CBAs totals $2.24 billion, with $1.401 billion of that amount from the state General Fund. Like nearly every other sector, state government is challenged to recruit and retain its broad and diverse workforce. These agreements aim to address staffing shortages – especially in high priority areas such as hospitals, ferries and state institutions – by providing overall wage increases, various retention bonuses and premium pay/lump-sum payments for employees working in institutions and other high-risk positions.

Family Child Care Providers. As noted above, the state also bargains with Family Child Care providers and that agreement totals $217 million from the state General Fund to support 3,612 providers. This agreement increases the cost-of-care rate to $2100/month for providers accepting subsidy; increases the Working Connections Child Care subsidy rate to the 85th percentile of the 2021 market rate survey; removes the cost of background checks; and increases the hourly rate for Family Friend and Neighbor providers from $3.00 to $3.85 as of July 1, 2023 and up to an hourly rate of $4.00 on July 1, 2024.

What Comes Next? Following the November Economic and Revenue Forecast, the Director of the Office of Financial Management will make a “financial feasibility determination” (meaning – can the state afford these agreements?). After that decision, the agreements will be included in the Governor’s proposed budget, and then the decision moves to the legislative arena. Note that collective bargaining agreements are given an “up or down” vote. This is one of the few areas where the Legislature does not negotiate nor get the opportunity to make changes.

On Sept. 30, the Washington State Department of Labor and Industries announced the hourly minimum wage will increase to $15.74 as of January 2023. This represents an hourly increase of $1.25, or 8.66%.

The 2016 initiative approved by Washington state voters calls for the Department of Labor and Industries to adjust the hourly minimum wage based on changes to the Consumer Price Index. With this increase, Washington will have the highest state minimum wage in the country.