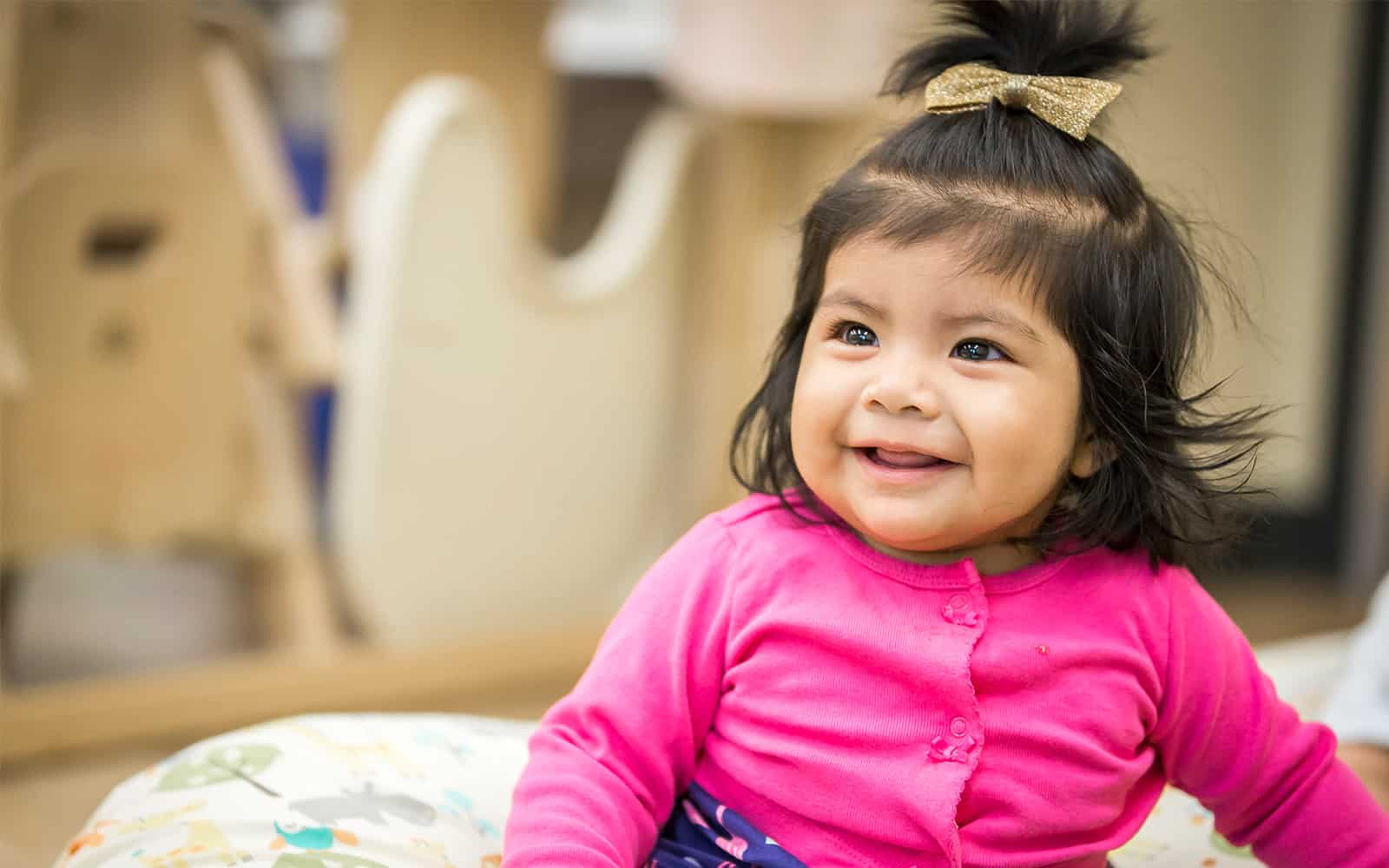 In this week’s Notes From Olympia: the week in Olympia in pictures, an overview of the legislative session in a virtual environment and the introduction of comprehensive early learning legislation.

The Week in Pictures

Given the events of the past week in the Washington State Capitol, I thought it would be illustrative of the current scene in Olympia to share some of the activity using pictures captured on cell phone cameras.

On Friday, January 8th, the newly elected and re-elected legislators were all sworn in virtually – with two sessions for the House of Representatives and one for the State Senate. Note that most of the legislators have adopted the official House of Representatives background. One learning from this week is that certain clothing colors can make the legislator’s bodies “disappear” and they can look like floating heads! 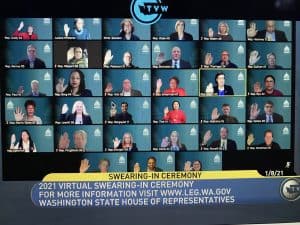 The next series of pictures represent different parts of the Capitol campus. After threats of potential violence, Governor Inslee activated 750 National Guard to join Washington State Patrol to provide additional security. The focus of this added security was Monday, January 11th as many legislators needed to be at the Capitol in person to approve the rules that allow them to move to a virtual platform.

I do not think I speak for just myself in saying seeing fences and barricades around Washington’s Capitol campus evokes a multitude of feelings. Thankfully, protests were peaceful and there wasn’t any violence. 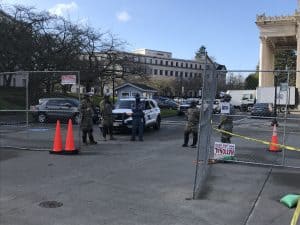 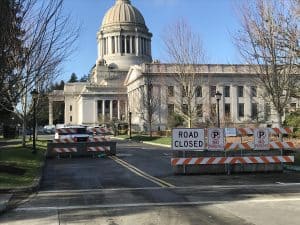 Both the Senate and House of Representatives chambers look significantly different. Plexiglass was added and everyone was masked and socially distanced. On Monday, when a large number of legislators were present, some members were placed in the galleries overlooking the floors and voting was done in blocks with people rotating in and out of the chamber to vote. It was clear that setting all of this up took a tremendous amount of logistical coordination for just one day of action.

It is fair to say that we have all run out of phrases for these times. Unprecedented, different, unusual. While nearly everything is different, the need for our Washington State Legislature to work to serve the residents of Washington state has not changed. How they go about doing that looks very different, but the purpose has not changed.

After meeting in person on Monday to adopt rules, virtual committee hearings started bright and early Tuesday morning via Zoom. Were there glitches? You bet! Most significantly, a major windstorm on Wednesday rendered many legislators and testifiers without power. I will say that people have been very flexible and gracious – maybe living through a pandemic has softened us all.

The new process of virtual hearings and virtual testimony is new to everybody. Back to my point earlier about major logistical coordination, this virtual testimony is a huge investment of legislative staff time. Each committee has staff dedicated to getting testifiers in and out of the virtual waiting room. I particularly felt for the staff of the Ways and Means Committee who had 158 people sign up to testify – all managed with a smile. Despite spending the past ten months on Zoom, I can say from personal experience that virtual testimony was a bit confusing, and I am hoping it will be a breeze from here on out (pro tip learned the hard way – you have to turn on your camera manually when you are admitted to the hearing).

During the introductory hearing of the House Appropriations Committee and prior to Thursday’s lengthy budget review hearing, Chair Representative Timm Ormsby reminded his committee members that testifying can be intimidating and this virtual setting will allow for greater public participation. He shared that in his committee, he encourages “grace, patience and respect, by all to all”.

Speaking of public participation, the process to either sign in to testify or submit written testimony is explained quite well on the legislative webpage. This is a great time to share your thoughts.

The main activity this week for early learning was in the fiscal committees – the Senate Ways and Means Committee met on Tuesday and the House Appropriations Committee on Thursday – with a review and testimony on the Governor’s proposed budget. The Governor’s Director of the Office of Financial Management David Schumacher kicked off the hearings with an overview of the proposed budget. Copies of Director Schumacher’s powerpoint can be found on the committee website.

This was followed by public testimony that lasted for hours with people sharing their recommendations on budget items ranging from K-12 education to behavioral health to natural resources. Early learning received attention, with testifiers focused on the Governor’s proposed investments in child care and home visiting.

I saw a tweet this morning of a water main exploding to illustrate where we are right now with bill introductions. Although legislators were able to “pre-file” bills throughout the month of December, the clip of bill introductions picks up in the first days of the legislative session.

There was an attempt to moderate the number of bills introduced given the restrictions of a virtual session. Under bill advancement guidelines, legislators were asked to only to introduce bills if they were urgently needed in 2021 and to introduce no more than seven . Additionally, legislators were asked that bills meet four filters: 1) advance racial equity; 2) respond to the COVID crisis; 3) advance economic recovery; and/or 4) address climate change. We will see if these guidelines actually lead to fewer bills introduced.

A major theme we are seeing so far in introduced bills relates to the state’s COVID response and specifically on the extent of the Governor’s emergency powers. Like everything else in 2020 (and 2021 so far), the number of decisions before the Governor associated with pandemic response was unprecedented.

Our state does have structures in place to allow for the expenditure of funding received outside of the legislative budgeting process timeline (e.g. a state agency receiving a grant in September) or for exercising gubernatorial emergency powers. The magnitude and duration of the pandemic certainly raised some questions about whether these structures needed adjustment. We are seeing bills ranging from severely curtailing a Governor’s emergency powers to tweaks to reflect lessons learned in the past ten months.

What’s in the Cue for the Next Week?

With the expectation that floor sessions will take longer given that legislators will be on Zoom, the timeline for Policy Committees was shortened to allow for more Floor Session time. The “policy committee cutoff” is February 15, and bills must be heard and reported out of policy committees by then. We expect the policy committee hearing calendars to fill up, particularly in the next couple of weeks.

The Fair Start Act which would lay out a structure and plan for a comprehensive and equitable early childhood system has been introduced in both the House and the Senate (HB 1213 and SB 5237, respectively). Sponsored by Representatives Senn and Chopp and Senators Wilson and Dhingra, these bills are slated to be heard next week, with the House Children, Youth and Families scheduled to hear the bill on Thursday, January 21st and the Senate bill on Friday, January 22nd in the Senate Early Learning and K-12 Committee. Given the comprehensiveness of these bills and the expected interest level for testimony, I would expect these hearings to be dedicated largely to these bills.

Our team at Start Early Washington is still analyzing the bills (which are identical at this point – known in this process as companion bills). We will provide more analysis in future Notes from Olympia.