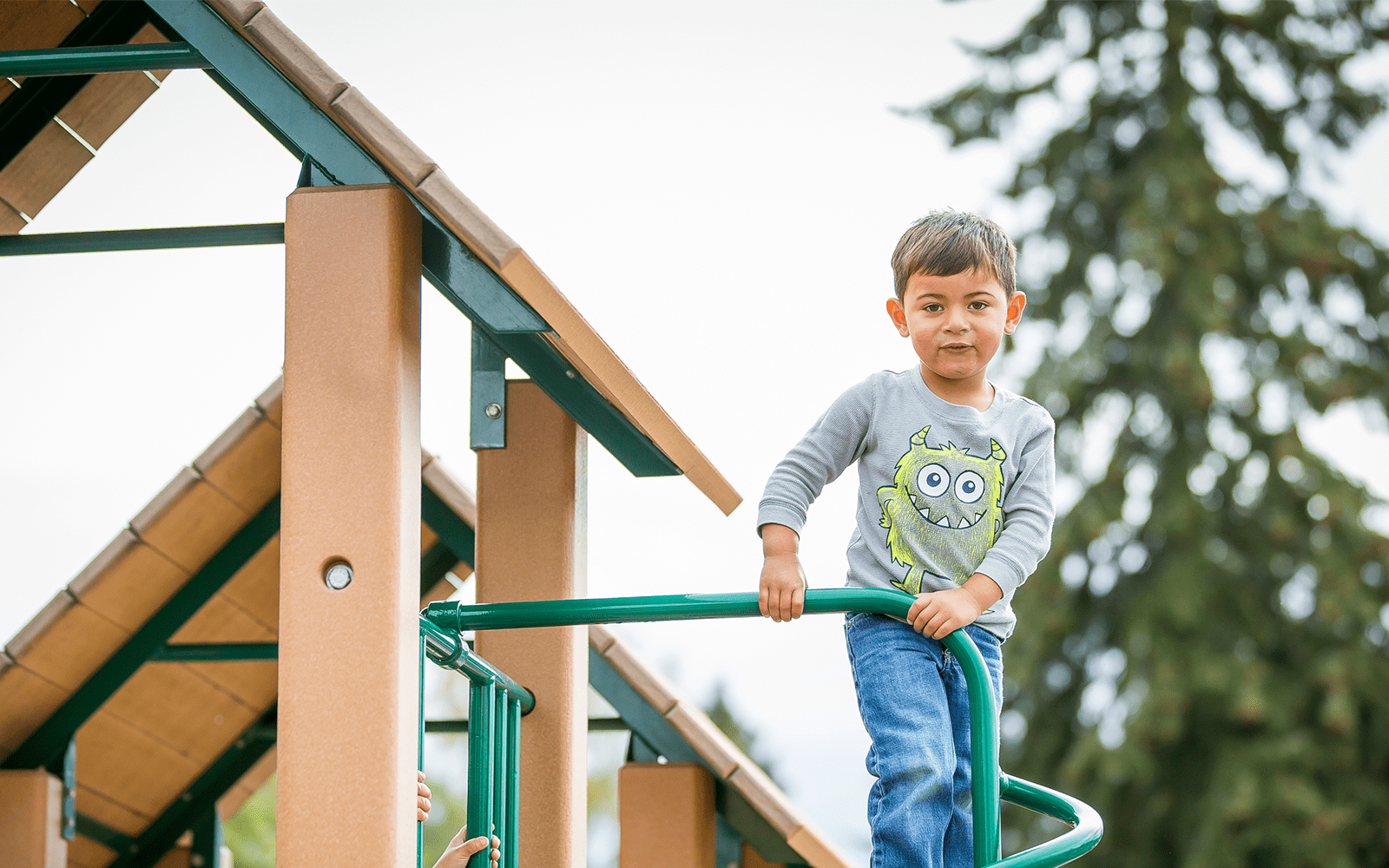 In this edition of Notes From Olympia: Washington state election results, what’s up before the end of the year and what we know about the 2021 legislative session.

Do the Washington State Senate and House of Representatives take final roll call votes on bills in the same manner?

As a fully mail-in ballot state, it is not uncommon to see initial election night results shift as further ballots are received and counted. On election night, it appeared that House Democrats would gain some seats and Senate Democrats might as well. While there were some swaps where incumbents were unseated by members of the other party, ultimately the overall party breakdown remained the same with House Democrats maintaining a 57-41 majority and Senate Democrats maintaining a 28-21 majority (one Democrat votes with Republicans, so the effective Senate breakdown is 27-22).

Over the weekend I was perusing social media and came across this picture of House Democratic leadership welcoming its new members (they held a welcome event via Zoom). This picture demonstrates that our legislature is becoming more diverse (and younger!). We look forward to working with all of the new legislators in each of the four caucuses. Bonus points for Speaker Jinkins background – she represents public health well with her background! 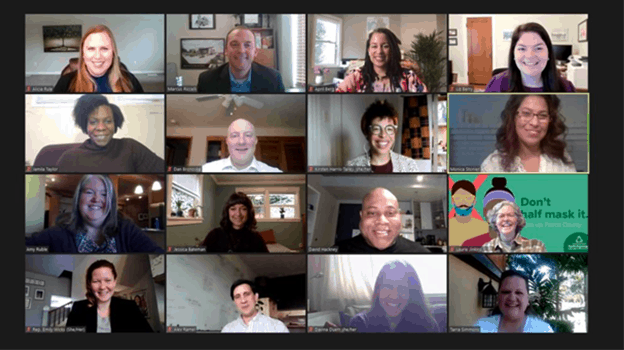 What’s Up Before the End of the Year

Uncertainty Continues to be the Theme for 2020

With Governor Inslee’s November 15th announcement of a four-week modified shutdown to combat the accelerating COVID crisis, the tone and
tenor is reminiscent to the early days of the pandemic. In addition to the pressing questions around hospital capacity and sufficient public health infrastructure, there is heightened discussion around the budget impacts of the pandemic (particularly with restaurants and retail largely shuttered during the holidays); if, when and how the federal government will provide relief; and how should the state provide counsel for in-person services. Further, as expected, rumors abound as to whether Governor Inslee will join the incoming Biden Administration to advance climate change. If he makes that move, that will set off dominoes, including our newly elected Lt. Governor temporarily assuming the Governor’s seat until an election could be held.

On November 18th, the State’s Economist Dr. Lerch provided the Washington State Economic and Revenue Forecast Council with an updated revenue forecast. The forecast came with the following caveats (2020 – the
year of the asterisk):

This information will inform the Governor’s budget work that is
underway and the next formal revenue forecast will occur in March –
right before the Legislature is scheduled to finalize its budget.

The Senate and the House will gather the week of November 30th for virtual Committee days. Committee days typically have a “first day of school feel” with legislators, lobbyists and staff gathering for a few short days together under the auspices of preparing for the next legislative session. This year the social (and fundraising) part of committee days will not be possible, so it’s like the first day of school with homework as the sole focus!

What will I be watching? There are a lot of hearings throughout the
week, but on November 30th I will definitely be tuned to TVW.org to
watch the Senate Ways and Means Committee at 2:30 and the House
Appropriations Committee at 3:30 (you can always catch-up on
missed hearings by looking at the archive button on TVW.org). Those
hearings will provide a deeper dive on fiscal matters that will influence the budget. I will be particularly watching to hear the questions from
legislators – they are always telling.

There will also be two policy committee hearings focused on child
care and COVID – the House Human Services and Early Learning
Committee is holding a work session on the issue on Tuesday,
December 1st at 1:30 p.m. and the Senate Early Learning Committee
will hold one on Friday, December 4th at 2:00 p.m.

The visual below was developed by the Governor’s budget shop, the Office of Financial Management (OFM), to depict the budget process. As you can see, budget preparation is a year-long affair.

In September, state agencies submitted their recommendations for inclusion in the Governor’s proposed budget for the 2021-23 biennium (which runs from July 1, 2021 to June 30, 2023). These are called decision packages. Given our state’s fiscal situation, OFM issued a strict directive to not request new funding and to instead suggest areas where savings could be achieved.

Since the submission of decision packages, the staff at OFM has been reviewing the proposals and meeting with the Governor’s staff and the Governor himself to identify priorities and get direction. The revenue forecast released on Wednesday, November 18th provides additional guidance about the state’s fiscal outlook and that information informs what the Governor will propose.

Typically, the Governor releases his proposed budget in mid-December. We will get hints as the time gets closer. We can expect the Governor’s budget to be “aspirational.” He will likely propose new revenue (such as a carbon tax) and propose investments predicated upon passage of this new revenue. 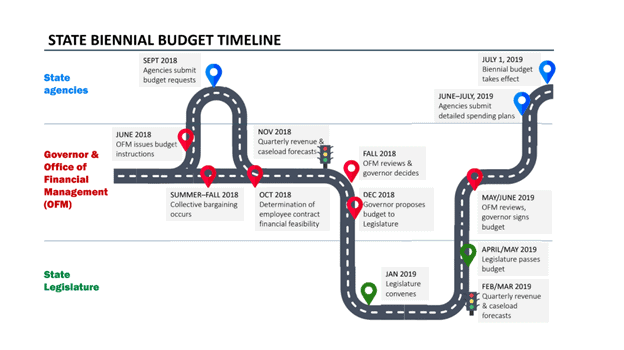 What do we know about the 2021 Legislative Session?

Virtual Legislative Sessions on the Horizon
Most legislative activity will be conducted virtually. Both bodies have announced that committee hearings will be virtual and, at this time, the Senate does plan to hold rolling, in-person floor sessions (with Senators being able to vote remotely if they prefer). Limited staff will be in person for support and the entire Capitol campus will be closed to the public and lobbyists. Legislators have advised managing expectations and the virtual nature will mean fewer committee hearings. Additionally, legislators have been directed to limit the number of bills they introduce.

The Senate and the House approach their floor votes differently. The Senate does “voice votes” with Senate staff calling out each Senator’s name in alphabetical order. Senators respond with aye or nay. If a Senator is off the Floor for a meeting with staff or a lobbyist, the Presiding Officer calls the names of the missing Senators after going through the list once. To help signal votes are coming, Senate Sergeants will bellow “roll call” so Senators can be prepared to come vote. Since there are 49 Senators, each roll call vote on each bill can take up to five minutes.