Notes From Olympia: March 12, Week 9 of the 2021 Legislative Session

In this Week’s Notes from Olympia: Highlights of the Week, Bill Roundup and Trivia about our Lieutenant Governor.

As both the Senate and House of Representatives have spent the bulk of the last two weeks “on” the Floor, this has been a common sight in both chambers. Masked Rostrum staff, surrounded by plexiglass, keeping the process moving. And, I should add, working incredibly long hours, including weekends.

In the State Senate, the Lt. Governor serves as President and presides over nearly every Senate Floor activity. In the House, multiple people serve in that presiding role. Much of the House Floor activity is led by the Speaker Pro Tempore (currently Representative Tina Orwall) and the Deputy Speaker Pro Tempore (currently Representative John Lovick). Speaker Laurie Jinkins will also preside on occasion, particularly when monumental bills are under consideration.

Since this is our new Lt. Governor Denny Heck’s first year in the role of Senate President, this week’s trivia is focused on tidbits about Lt. Governor Heck. To learn more beyond the bland web articles, I reached out to the Lt. Governor’s longtime friend and my colleague, Paul Berendt.

There is a lot of press around the many positive investments for our nation’s families, including the Child Tax Credit as well as substantial child care, Head Start, and home visiting investments. The per state funding allocations are still being finalized and we are all anxiously awaiting federal guidance on spending parameters.  In the meantime, I wanted to share this resource developed by the national First Five Years Fund that contains details on the specific investments targeted to families. As Washington state budget writers put the finishing touches on their proposals, we will be carefully watching how they approach this significant infusion of federal dollars for families and other critical public investments.

Fair Start Act Bills Advance. Both the Senate (E2SSB 5237) and the House (E2SHB 1213) versions of the Fair Start for Kids Act passed out of their respective chambers before the March 9th cutoff. Start Early Washington has updated its resource documents detailing a summary of the most recent amendments and a side-by-side chart of the current versions of both bills. E2SSB 5237 has been scheduled to be heard in the House Children, Youth and Families Committee on Thursday, March 18th. E2SHB 1213 has not been scheduled for a public hearing as of this writing.

This is an exciting time for Washington families as the state is poised to adopt a roadmap for broadly expanding its quality early learning infrastructure, backed by significant new investments. With amendments adopted on Saturday, the Senate signaled its priorities for the Fair Start Act by advancing the timeline for implementation of increased eligibility and reimbursement, leveraging a portion of child care funding from the American Rescue Plan Act.

The House version has not yet been amended to reflect how the federal child care and other funding will advance the Fair Start for Kids Act goals. With both bills still moving, we can expect the Senate and House to decide on one of the bills as the vehicle to move forward and negotiate differences between the two policy and budget approaches.

The bill contains intent language that the first $350 million generated by the tax would go into the Education Legacy Trust Account with a focus on early learning and child care; the next $100 million to the state General Fund; and the balance of funds collected would go into a newly created Taxpayer Fairness Account.  This Taxpayer Fairness Account is intended to fund the Working Families Tax Exemption referenced above.  This Seattle Times article provides a summary of the debate and the bill’s details.  ESSB 5096 will receive a public hearing in the House Finance Committee on Monday, March 15th.

Floor Action Concluded.  After what felt like weeks of staring at screens as the House and Senate spent hours alternating between caucus meetings, debates and votes, the initial round of floor activity concluded on Tuesday, March 9th.  For lobbyists, monitoring Floor activity in a virtual environment required constant refreshing of TVW and texting colleagues, “are they back?”

Given that I reported on the 5:00 bill last week, I thought I would share how our legislature approached it this year. The House actually adjourned at 3:46 p.m., far before the 5:00 deadline. Their final bill before cutoff was ESHB 1297, the Working Families Tax Exemption. This bill passed 94-2 and it looks like there will finally be funding for this policy that has been on the books but unfunded for more than 10 years.

The Senate took the unusual step of scheduling a House bill for its 5:00 bill.  This is unusual because a House bill is not subject to cutoff deadlines at this stage. The House bill covered was SHB 1088 relating to potential impeachment disclosures. This bill passed 46-3 and is one of the policy reform proposals under review this year. Senate leadership stated they took this unusual step to demonstrate their commitment to advancing law enforcement reform this year.

Early Learning Facilities Bill Moves to the Senate. On Monday, the House approved ESHB 1370 on a 90-7 vote, making improvements to the existing Early Learning Facilities program. Prior to the vote, the House approved an amendment to name the facilities funds after former Representative Ruth Kagi. On a day with sometimes controversial items, this provided an opportunity for members on both sides of the aisle to celebrate Representative Kagi’s legacy. Related to my blurb above about presiding officers, Speaker Jinkins presided over consideration of ESHB 1370 and took a point of personal privilege following the bill’s passage to honor her former seatmate, Representative Kagi. ESHB 1370 is now in the Senate, where it was referred to the Senate Ways and Means Committee.

DCYF Licensing Bill Receives Public Hearing.  On Thursday, the House Children, Youth and Families held a public hearing on SSB 5151, DCYF’s licensing bill.  The bill contains a number of licensing provisions within the Department.  In terms of early learning, the bill waives child care licensing fees until June 30, 2023 and makes the outdoor preschool pilot program permanent.  It is scheduled to receive a vote in the committee on March 17th.

On Deck Next Week

Revenue Forecast. Scheduled appropriately on St. Patrick’s Day, the state’s Economic and Revenue Forecast Council will receive an updated revenue report. This report will help inform budget writers in their efforts to finalize their budget proposals. At a media availability this week, House Majority Leader Representative Pat Sullivan noted that the budget proposals may be released a little later this year to give budget writers time to analyze the various aspects of the American Rescue Plan Act.

Lt. Governor Heck served five terms in the Washington State House of Representatives. He was first elected at the ripe age of 24 in 1976, and he eventually rose to the position of House Majority Leader. Lt. Governor Heck also served as Chief of Staff to former Governor Booth Gardner and helped found TVW. This experience with the Washington State Legislature allowed him to jump right into presiding over marathon Senate floor sessions (although he did slip more than once and refer to the body as the House – understandable!).

The son of a telephone operator and a teamster, our Lt. Governor was one of the first graduates of Evergreen State College. He has called Olympia home for forty years, so it is really not a surprise he would come back to the State Capitol where he started his career. According to Paul, the Lt. Governor is an “extraordinary” cribbage and pinochle player and is a part of an Olympia based book club that has met for a number of years.

I wonder if his book club read Heck’s own 2002 novel, “The Enemy You Know” about Jess Stevens who, according to Amazon, “retires abruptly at the peak of his career to build a ‘dream’ home on the idyllic shores of Loon Lake, 35 miles north of Spokane, Washington.” 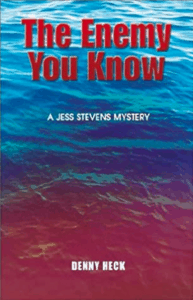