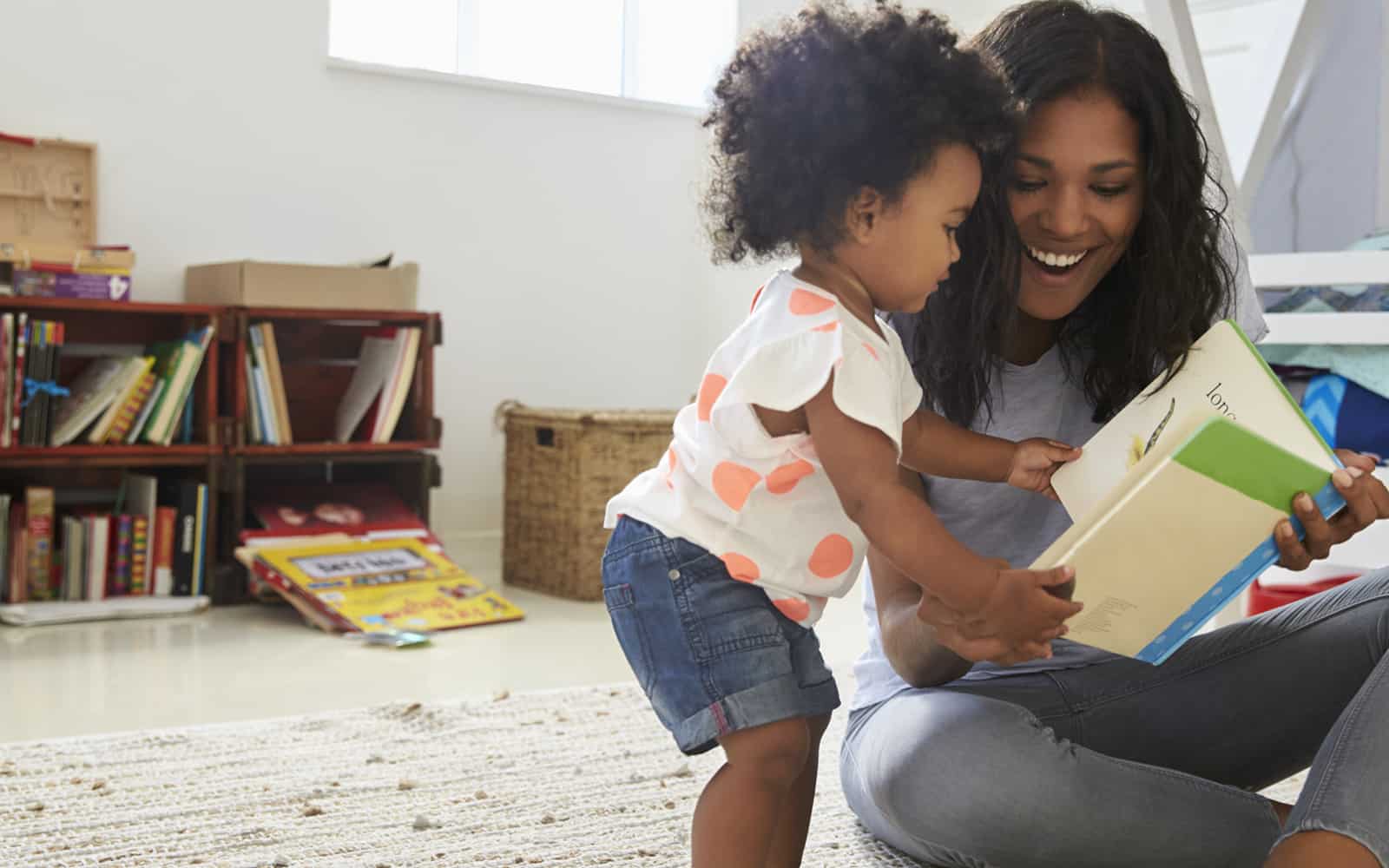 In this week’s Notes from Olympia: Highlights of the Week, Status of Early Learning Bills, Trivia and Reflections on the 20th Anniversary of the Nisqually Earthquake with (our Favorite) Retired Early Learning Legislative Champion.

The earthquake hit while legislative session was underway. After the rumbling subsided, lawmakers, staff and lobbyists gathered safely outside of the buildings, as they were taught in grade school. While they were awaiting further instruction, a deep crack was noted on one of the pillars holding up the huge dome: 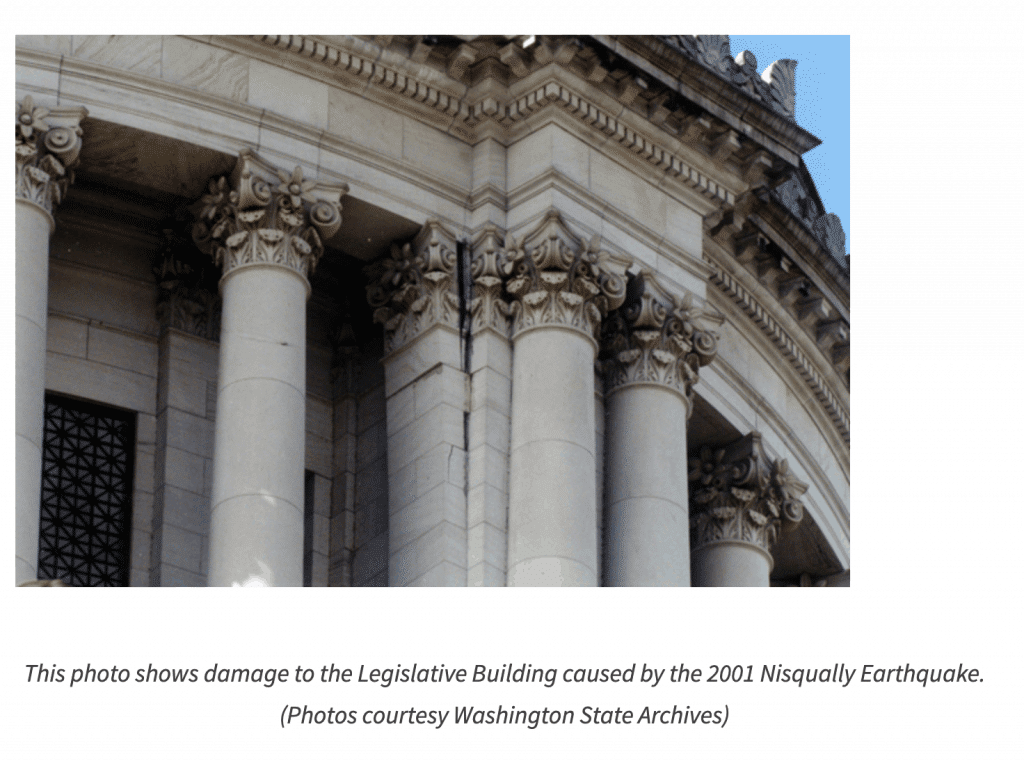 When there is a pause in activity, it is sometimes unclear whether it is due to the need for additional time to resolve issues (often referred to as “things have blown up”) or if there is a logistical issue. This confusion (at least for this author) occurred on Tuesday evening when the House of Representatives was debating SHB 1356 which would bar public schools from using Native American names, mascots and other references. In the midst of the discussion, there was an abrupt pause. After some time, House Deputy Speaker Pro Tempore Representative John Lovick came back on to remind legislators of the steps to take if they encounter technical challenges. Problem solved – issue was not with the bill itself; the break had to do with ensuring legislators wishing to speak could be heard. The bill passed and now moves to the Senate for consideration there.

The debate on SHB 1356 is worth watching, starting with the bill’s sponsor Representative Debra Lekanoff’s opening remarks at one hour, seventeen minutes.   I know a number of newspapers ran articles on this bill and the debate, but it is valuable to watch and hear the full discussion.

Status of Early Learning Bills. We expect to see a number of early learning bills receive floor debate over the next ten days. We will provide a fuller status report in next week’s March 5th Notes from Olympia.

On Thursday, the Senate passed SSB 5151 after extensive discussion. This is the Department of Children, Youth and Families’ bill that relates to a number of licensing items. With regard to early learning, the bill waives child care licensing fees and makes outdoor preschool permanent, rather than a pilot, allowing outdoor preschool programs to participate in Working Connections Child Care. The extensive debate on this bill was not focused on these early learning items, but on child-specific licenses for children in foster care.

Other bills expected to be addressed include both the Senate and House versions of the Fair Start for Kids Act (2SHB 1213/2SSB 5237) and SHB 1370 which makes improvements to the Early Learning Facilities program.  Bills that are “Necessary to Implement the Budget,” such as SHB 1451 which moves out the ECEAP entitlement date, are not subject to cutoff deadlines.

The Senate Capital Gains bill, SSB 5096, is in the Senate Rules committee and could be pulled to the Floor to receive a debate and vote prior to the March 9th cutoff date.  The House Capital Gains bill, HB 1496, is still in the House Finance committee, but it is not subject to cutoff deadlines because it would be “Necessary to Implement the Budget”.

How to Follow Legislative Activity. As noted above, both the Senate and House will be spending until March 9th in caucus or floor session. We are expecting Saturday work sessions both tomorrow and next weekend (and even on Sunday, maybe). And while a general outline of schedules is provided, the legislative process is fluid, to say the least.

As we shared in previous updates, all activity is captured on TVW.org. For live coverage, you can click “Schedule” in the upper right corner to catch live action. If you want to catch up on debate you missed, you can go to “Archives” on the upper left and go to the date of the floor session (or committee hearing). Note the Archives are organized by date and with marathon sessions, sometime the morning, afternoon and evening floor sessions are categorized as separate events.

Additionally, there is a wealth of information on the official legislative website at leg.wa.gov.   You can click on the “bills” section on the right and enter a bill number to learn the status and read the latest version.  The main landing page also has a “What’s Happening on the Floor” heading that provides links to the House and Senate Floor Calendars.  The House and Senate Display Calendars will let you know what bill is being heard and, if the Legislature is not in session, when they will return (note those return times are just a guidance). 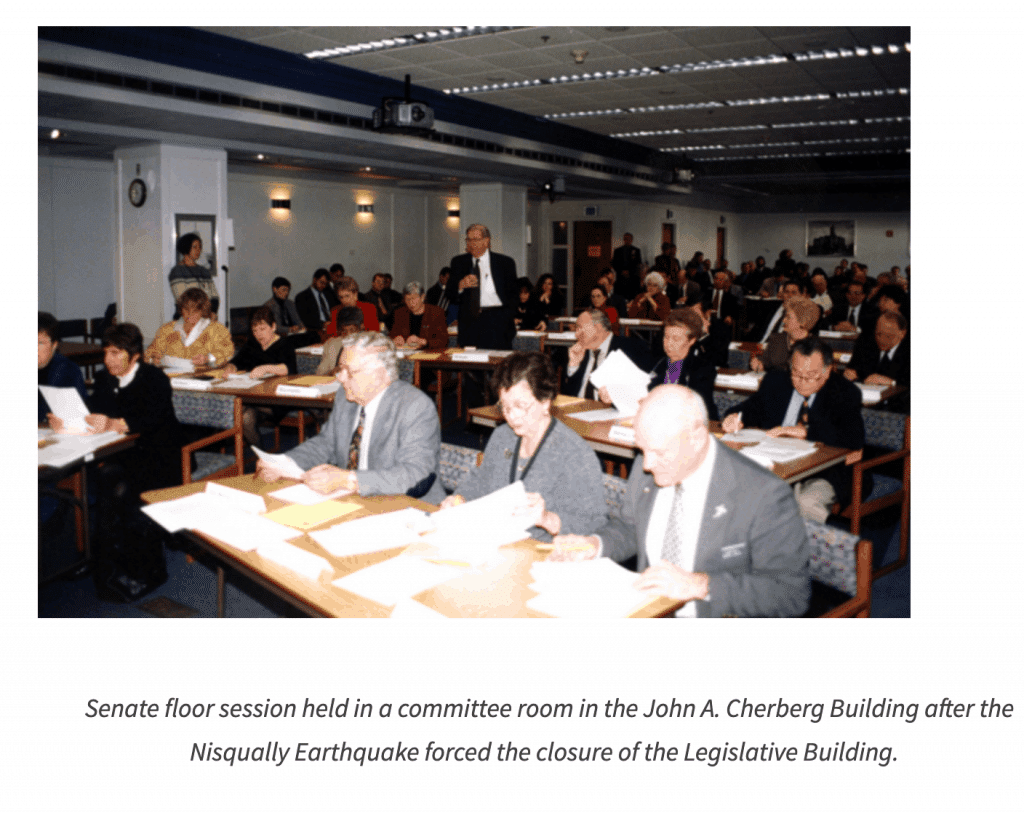 To get a first-hand account of that infamous day and for what life was like afterwards when the Legislative and other campus buildings were closed for repair, I reached out to former Representative and lifelong early learning champion Ruth Kagi.

At the time of the quake, Representative Kagi was in her 3rd floor office in the John L. O’Brien Building that looked out onto the Legislative Building. She described the sound of the earthquake as a freight train. She was meeting with a lobbyist when the shaking began, and the lobbyist promptly dove under a table. Remembering the admonition learned in her childhood to stand in a doorway during an earthquake, Representative Kagi quickly moved to her doorway, waiting it out (this will be important later).

Representative Kagi recalled that a number of pipes broke on the 3rd floor and water was everywhere. When the rumbling subsided, everyone ran for the stairs and assembled in the parking lot. Hours later when it was determined to be relatively safe, people were allowed to return to their offices to retrieve their personal belongings. Back in her office to grab her purse, Representative Kagi realized that directly above her door was a glass transom window that thankfully did not shatter on her during the quake!

Miraculously, no one was hurt on the Capitol campus. Representative Kagi recalled that when they were able to return to their chambers before the Legislative Building was shut down for repairs, she saw tipping walls and cracks and holes. In the O’Brien building, a chunk of plaster had fallen in one of the stairwells. Former Representative Kathy Haigh and her legislative assistant created artwork depicting a mountain scene out of the broken plaster area that remains in the stairwell to this day. I was not on the Capitol campus that day, but if I were there, I would have gone and taken a picture and included it here. My search to find a photo online came up empty.

Representative Kagi went on to share memories of House floor activity being held in a modular building in a parking lot while the O’Brien building was being renovated and upgraded (the renovation of the O’Brien and Cherberg buildings was undertaken to ensure seismic safety in those buildings as well). Representative Kagi recalled that long tables filled the modular building; legislators were squished together, the modular had low ceilings and it was very loud. She remembered one night when they were voting on the budget, the heat went out, and they were there until 3:00 a.m. with no heat in a modular in a parking lot. Who says being a state legislator isn’t glamorous??

Other memories from Representative Kagi’s tenure in modular buildings were of walls so thin you could hear conversations happening in other offices. Having her office near a very boisterous legislator, Capitol staff had to come in and install sounding boards so she could have functional meetings!