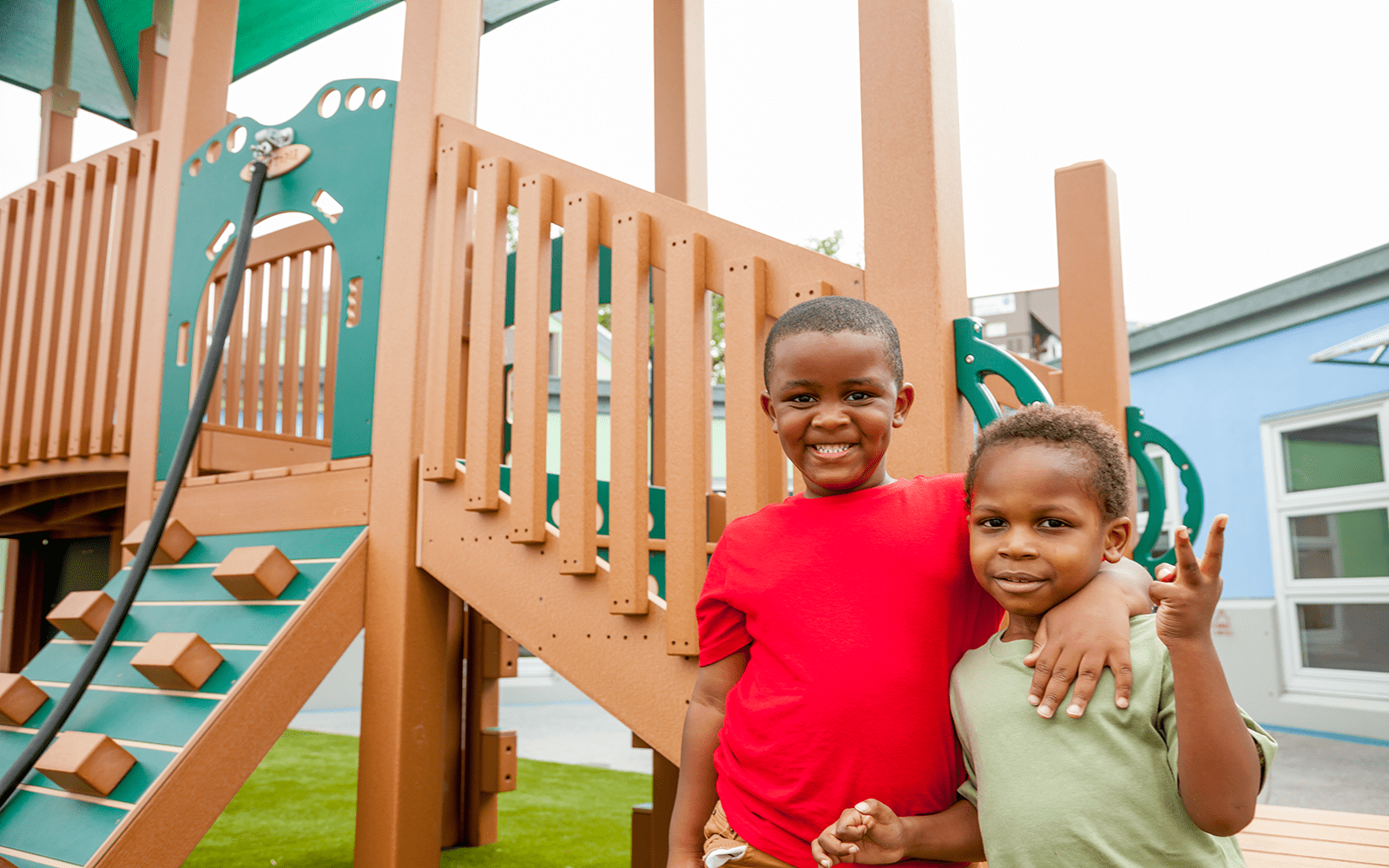 Notes From Olympia: March 4, Week 8 of the 2022 Legislative Session

Included in this edition: Trivia, Highlights of the Week and What’s Up Next. 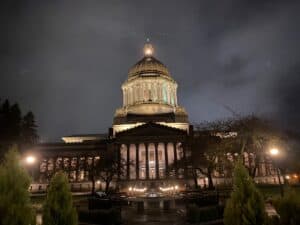 March serves as Women’s History Month. This week’s trivia focuses on Washington state’s first female Governor, Dixy Lee Ray, who served one term from 1977 to 1981. Governor Ray began her career in a non-political field, earning a doctorate from Stanford in what subject area? Bonus points if you know the topic of her dissertation. 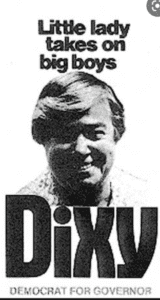 Hurry Up and Wait? With a near solid week of fiscal committee meetings concluding Monday and a quick pivot into marathon Floor sessions Tuesday, those involved in the legislative process had ample time to practice their waiting game. This is the point of the legislative session when scheduled hearings and Floor times become fluid as legislators retreat to caucus to be briefed and discuss bills while lobbyists’ phones fill with texts trying to track it all – “Did the House come back? Are they still in caucus?”

With the clock ticking toward the 5 p.m. deadline today for bills to pass out of the opposite house, interested parties want to ensure their favored bills do not fall through the cracks and instead make it over the finish line. During this week, time is not our friend as there are simply not enough hours in the day to debate and vote on all the outstanding bills. They call the legislative process sausage making for a reason!

Be sure to check out Start Early Washington’s Bill Tracker on our State Policy Resources page for the latest bill information.

More Cars in the Parking Lot. Following the Senate decision last week, the House of Representatives also moved to bring more House members back to the Floor for in-person debates and open their galleries to more observers. The campus is not anywhere close to its normal level of activity, but there are certainly more cars in the lots for these final days. 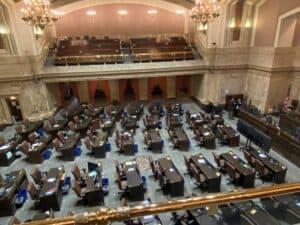 Saying Goodbye. It is not unusual for lawmakers to announce they do not plan to run for reelection during the short, 60-day session. This year, though, seems to have brought an unprecedented number of retirement announcements, including from some long serving legislators. As we are looking at the calendar for the final days of this session, we can also expect time built in to honor these retiring lawmakers’ legacies.

The Final Sprint. After tonight’s cutoff deadline for bills to pass out of their opposite house, focus will shift to finalizing and approving the supplemental budget and reviewing how bills were changed in the opposite chamber.

When the final budget is released, we will send out a summary with key details related to early learning.

Governor Dixy Lee Ray earned her Ph.D. from Stanford in Biology. The bonus question was clearly a softball as her dissertation was about the lanternfish and was titled “The peripheral nervous system of Lampanyctus leucopsarius.” This built on her master’s thesis “A Comparative Study of the Life Habits of some Species of Burrowing Eumalacostraca.”

I went deep into learning about Governor Ray while the Senate and House fiscal committees caucused for extended time periods. The following represents perhaps more than you wanted to know about Governor Ray, but I found her story fascinating. I learned she was known for her memorable quotes – quotes that reflected her intelligence, sense of humor and willingness to challenge the establishment. You will see examples of some of these quotes below.

Governor Ray was born Marguerite Ray. Family members called her “little Dickens” (Devil) and when she turned 16, she legally changed her name to a shortened version of her nickname and added the middle name Lee in a nod to her descendent Robert E. Lee. She began accumulating the title of “firsts” as a child when, at age 12, she became the youngest girl to summit Mt. Rainier.

Following her educational pursuits, Governor Ray worked as a professor at the University of Washington where she again was a first, this time the first female professor in Zoology. She also served as the Chief Scientist on the schooner SS Te Vega during the International Indian Ocean Expedition. In the early 1960s, she was brought in to turn around the Pacific Science Center – where she kept a police whistle at her desk to run off any “hippies” hanging around. Around this time, PBS asked her to host “Animals of the Seashore.” In 1967, the Seattle Maritime Society named Ray its Maritime Man of the Year – the first time the award did not go to a man.

Governor Ray was a longtime supporter of atomic energy. In 1973, President Nixon appointed her Chair of the U.S. Atomic Energy Commission and, later, President Ford appointed Ray the Assistant Secretary of State for Oceans and International Environment and Scientific Affairs. While she was Chair of the U.S. Atomic Commission, she lived out of a motor home in rural Virginia. Every day, she was chauffeured from her motor home to her office in Maryland, along with her 100-pound dog Ghillie and her mini-poodle Jacques. She resigned from her role as Assistant Secretary of State after just six months, citing Secretary of State Henry Kissinger’s unwillingness to take her advice – or even meet with her. She left the nation’s Capital advising, “Anything the private sector can do, the government can do worse.” 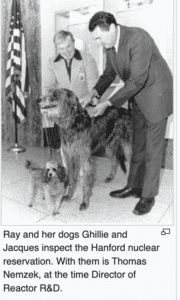 Dixy Ray and her dogs at the Hanford nuclear reservation
Photo Credit: Wikipedia

Ray decided to throw her hat in the political ring at the state level and, in her first political race, defeated Republican King County Executive John Spellman in the 1976 gubernatorial race 53-44%. Previously unaffiliated, Ray ran as a Democrat. When asked why she opted for the Governor’s seat in her first run, Ray replied, “I was much too old to start at the bottom, so I decided to start at the top.”

Here are some quick fast facts about Ray’s time as Governor:

From the start, Ray experienced a tumultuous relationship with the press and the Legislature. She ended the previous tradition of daily morning press conferences, and she once sent an intern to a House Energy Committee to convey the message that Governor Ray would not accept the committee making any changes to her energy legislation. As expected, neither move went over well in those largely male establishments.

Tensions grew between Governor Ray and the Legislature during her tenure. One source of contention was the length of the legislative sessions and the Governor’s insistence that the Legislature should complete their work within their allotted 60 days. In 1978 Ray refused to call a special session and that was the last year a legislature did not meet in the second year of a biennium. Soon thereafter, the Legislature passed an amendment to the Constitution to change the cadence of the legislative session from 105 days in odd-numbered years and 60 days in even-numbered years. This timeline continues to this day.

Governor Ray’s frayed relationship with the Democratic Party led to (then) Democratic State Senator Jim McDermott running against her in the 1980 Democratic primary (“Nixy on Dixy” was a campaign slogan used against her). McDermott prevailed in the primary and went on to lose to John Spellman in the 1980 general election.

In my research on Governor Ray, every article mentioned her personality with an array of adjectives and most referenced her personal clothing style. It wasn’t until my last resource document that the author raised the question that was on top of my mind – do articles on male leaders talk about their clothing style or any eccentricities? Of course not.

“We shouldn’t accept things just because somebody says so.” Governor Dixy Lee Ray 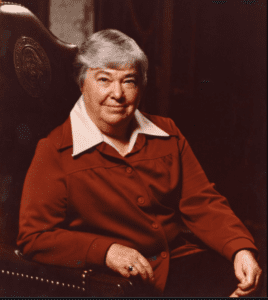