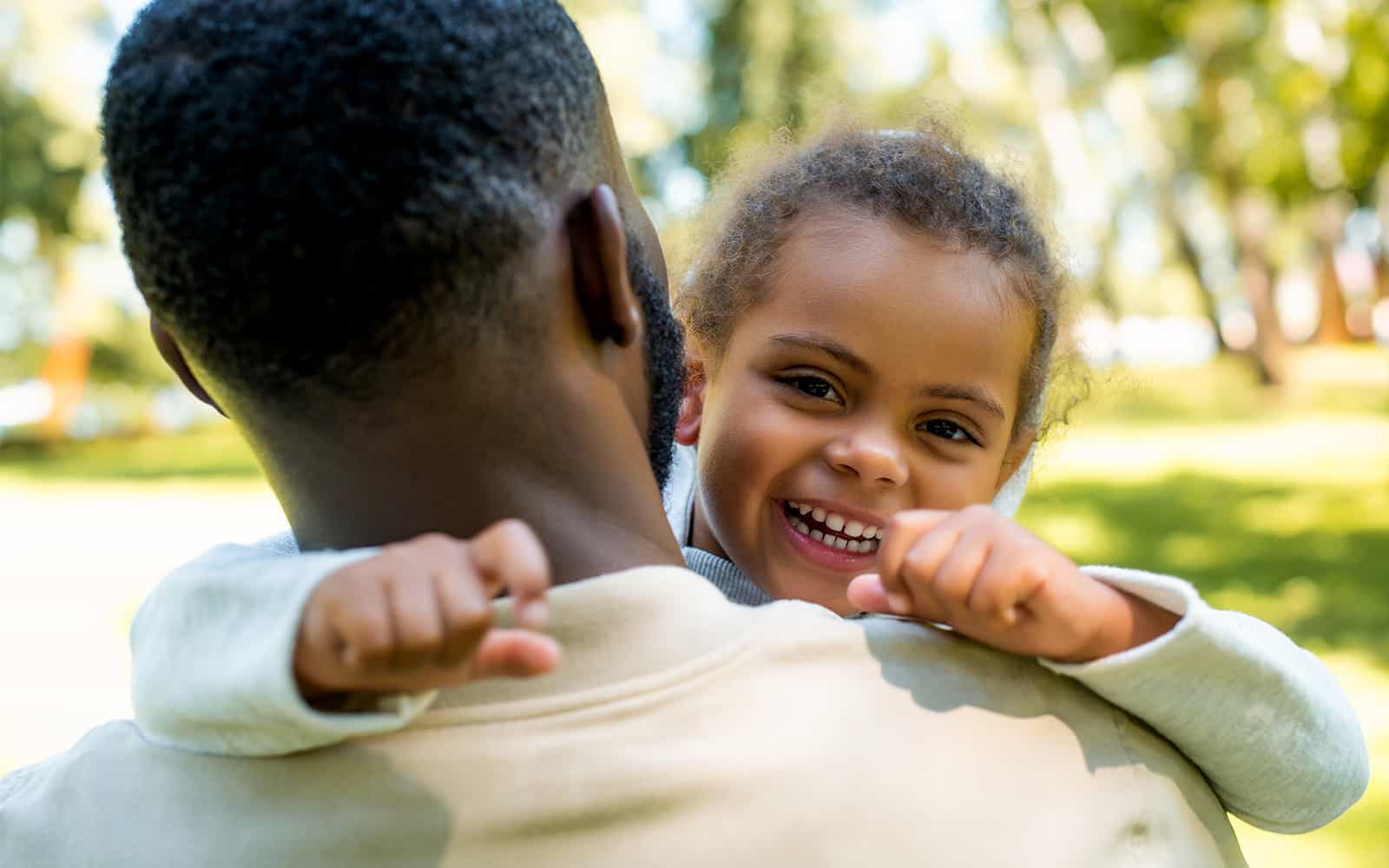 Included in this edition: Trivia, Highlights of the Week, Bill Updates and What’s Up Next. 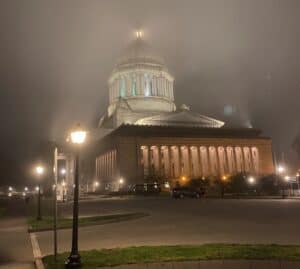 Another photo from the author on a foggy morning walk

Which state agency is currently housed at the “Old Capitol Building” in Olympia?

Takeaways from Legislative Leadership Remarks. Each week, Democratic and Republican legislative leadership holds media “availabilities” (think press conference) where legislative leadership provides updates on the activities of the week and answers questions from the press. In this week’s media availability, as well as a presentation to the Spokane Chamber of Commerce (Greater Spokane Incorporated), Democratic leadership stressed that the state’s current revenue surplus of over $10 billion represents a lot of one-time revenue and cautioned that investing too much of this one-time funding into ongoing commitments would create budget pressure in the out-years when that one-time funding is no longer available. Democratic leaders also highlighted their priority to further economic recovery for all state residents.

In their media availability, Republican leadership also highlighted similar challenges – and this is where the philosophical differences come into play. Republican leaders are calling for tax relief while Democratic leaders are calling for investments in areas such as housing, small businesses and supports for students in the K-12 system (think more school nurses, counselors, etc.).

During the Greater Spokane Incorporated event, Speaker Jinkins shared that if the COVID-19 numbers continue to decline, she hopes and expects legislators to be back on campus for in-person Floor action (assuming under the protocols adopted prior to the Omicron spike which would call for rolling cohorts of legislators on the House Floor). It is good to remember Speaker Jinkins works in public health, so public health recommendations will guide any decision to resume work in-person. I did not hear Senate leadership address the question as it relates to their plans, but assume the two bodies are coordinating and consulting with each other.

It was a busy week in Policy Committees with a mix of Public Hearings and Executive Sessions (votes). Start Early Washington’s bill tracker is published every Thursday during the legislative session on the top of our Start Early Washington State Resources page. Please note that we expect frequent changes to the schedule over the next 10 or so days, so it is a good idea to refer to the Legislature’s official bill information page for the most up-to-date information. 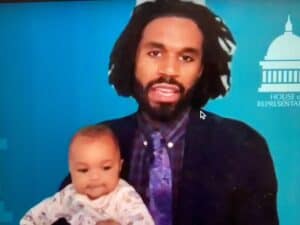 HB 1947 (Diaper assistance for families participating in TANF). W.C Fields famously said “Never work with animals or children” because they are scene-stealing and unpredictable. This adage played out Friday in the hearing on HB 1947 in the House Committee on Housing, Human Services and Veterans when the bill’s prime sponsors, Representatives Noel Frame and Jesse Johnson, brought their adorable, scene-stealing children to help make the case about the need to support families with the expense of diapers. That bill is scheduled for an Executive Session Jan. 28.

A companion bill in the Senate (SB 5838) was also heard in the Senate Committee on Human Services, Reentry and Rehabilitation Committee Jan. 21, and voted out of that committee Jan. 27. A representative from the Nurse-Family Partnership program testified from the perspective of a home visitor about the pressure the expense of diapers places on families with young children.

Both the Department of Children, Youth and Families and Schools Out Washington testified in opposition to the proposal as currently written. Concerns expressed included the potential for negative safety impacts on children, additional workload for staff and moving the ratios from rule – which provides DCYF with flexibility to grant exemptions – to statute, which would remove flexibility to respond to individual circumstances.

HB 1843 has not been scheduled for a vote as of this writing.

SHB 1872 (Care Worker Center). On Jan. 26, the House Committee on College & Workforce Development approved Substitute House Bill 1872. The bill would establish a care worker center to elevate care sectors (including people who work with children, the elderly, people with disabilities) in the workforce to increase retention and recruitment and promote the value and different employment options of a care worker.

As reported in our update from last week, the bill includes child care workers in this effort. Child care advocates who testified stressed the importance of increased compensation. The Substitute Bill aims to address this compelling need and expands the definition to refer to early learning, rather than solely child care. The Substitute bill also provides more detail on the structure and responsibilities of the proposed care worker center. The next step for this bill would be a hearing in the House Appropriations Committee.

SSB 5793 (Stipends for participation in state groups). Last Friday, the Senate Committee on State Government and Elections approved Substitute Senate Bill 5793 which looks to change current statute to allow for individuals with lived experience participating in state boards, commissions and other workgroups and advisory bodies to be compensated for their engagement. While there is widespread agreement on the bill’s goal, discussions are underway to work through the logistics of how to operationalize this goal and avoid unintended consequences. In short, the bill is still a work in progress.

SSB 5793 will be heard in the Senate Ways and Means Committee Feb. 4.

The first cutoff is next Thursday, Feb. 3, when bills need to be voted out of Policy Committees in their house of origin. Quickly thereafter, we will see fiscal committee cutoff on Monday, Feb. 7.

The short timeframe between the two cutoff dates means there will likely be a full day of hearings Saturday, Feb. 5 in the Senate Ways and Means and House Appropriations Committees to get through the volume of bills referred to both committees prior to fiscal cutoff.

An unusually large number of bills were introduced in this short session – I believe the number now tops 1,000. These proposals each generate a workload for those engaged in the legislative process. For example, work for the code revisors office in writing the bills and amendments; work for committee staff in scheduling and preparing analyses; and work for the bill sponsors in negotiating amendments with stakeholders. These cutoff dates will hopefully provide a reprieve as the process naturally provides a filter, winnowing down the number of bills under consideration.

Similar to the English language, there is always an exception to every legislative rule and one exception I point out every year is that bills deemed “Necessary to Implement the Budget” are not subject to these cutoff deadlines. Bills “Necessary to Implement the Budget” still must go through each step of the process (no Chutes or Ladders tricks here), but the only deadline they are subjected to is Sine Die (adjournment).

Senate Early Learning and K-12 Committee Work Session. On Feb. 2 at 10:30 a.m., the Senate Committee on Early Learning and K-12 will hold a work session that looks at supports for children and families. It will include an update on implementation of the Fair Start for Kids Act as well as Family Engagement strategies. Look for a summary and links to relevant documents in next week’s update.

HB 2068 Action. A Public Hearing and Executive Session are scheduled for Jan. 31 and Feb. 2 on HB 2068, the measure to create the Imagination Library of Washington, building on the Dolly Parton Imagination Library which provides free books to young children.

Speaking of Dolly Parton, I was turned on to the podcast “Dolly Parton’s America” that digs into her career history and the real stories behind her amazing music. I’m only a couple of episodes in, but it is a fascinating look at an inspiring woman.

The Office of the Superintendent of Public Instruction (OSPI) is housed at the “Old Capitol Building” in downtown Olympia, directly across from Sylvester Park.

Built in 1892 to serve as the Thurston County Courthouse, the original building was reminiscent of a castle, housing a 150-foot high, eight-sided clock tower in the center with a clock featured on each side. Chuckanut stone from Whatcom County was used in the construction.

In 1901, the State of Washington purchased the courthouse for $350,000 ($350,000!) to repurpose it for the State Capitol. The building’s original architect, Willis Ritchie, was called back to design a new wing to house the State Senate and the House of Representatives.

The New Capitol Building was dedicated at the inauguration of Governor Albert Mead Jan. 1, 1905. The Legislature met at that location from 1905 until 1928 when the current building was completed.

Photo credit: Office of Superintendent of Public Instruction
(Note the octagonal clock tower and the additional towers adorning the building)

One fascinating tidbit I picked up on the OSPI website was that the “Old Capitol” had a wrought-iron elevator that not only transported people, but also doubled as a snack bar. Try as I might, I could not find a picture of that elevator/snack bar. I have never seen an elevator/snack bar but think they may need to make a comeback.

It was fortuitous the Legislature moved into their current digs in 1928 because a fire later that year burned through the entire fourth floor and the clock tower of the Old Capitol Building. And then, a 1949 earthquake that registered 6.7 caused further damage, destroying the rotunda, House Chamber and galleries as well as 10 of the 12 remaining towers.

As a result of fire, earthquakes and subsequent construction, the building looks quite different today. During the 1970s, several studies looked into what the building could be used for, and identified renovations needed for people to safely work in the building. With a budget of $9 million, it was rehabbed to house the Office of the Superintendent of Public Instruction and the building was dedicated on George Washington’s birthday – Feb. 21, 1983.

I have been in this building for various meetings at OSPI and, upon researching this week’s trivia, realized I have missed out on some cool state history. Tours are offered, where one of the three remaining legislative desks (used from 1905-28) is on display as well as the original 1861 document creating Territorial Schools, which eventually became our state’s public school system. I will definitely check this out! 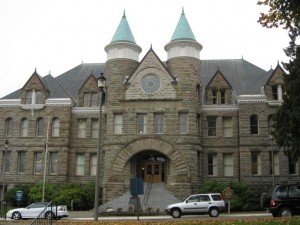 A present day look at the “Old Capitol Building.”

Sources: The Office of the Superintendent of Public Instruction, the Department of Enterprise Services and Thurston Talks